Today we climbed the highest peak in the North Island: Mount Ruapehu. It is an active volcano, because of its volcanic activities over the last thousands of years, it has many peaks. Of course we climbed the highest one: Turangi Peak with 2797m. We have tried to ascend the peak already 3 weeks ago, but we had to turned around about a hundred metres before reaching the summit. The weather turned and we had no views at all.

Last time we could see barely each other. There was no difference between snow and sky to us. Just before the summit the terrain got steeper, so we decided to turn around.

This time we had good views from the beginning on. From the carpark we could see the peak. Unfortunately it was still 1200m higher. We had to cross the Turoa skifield again, this time it was already open. We decided to start at 7am to escape the skifield before it opens. At that time the snow guns were working and at times we wished we had taken the lifts 2 hours later.

As we left the skifield behind, we could follow some older footsteps. Lisa had have a cold a few days ago, so we were a bit slower than expected. The breaks were always good to have and we always had incredible views to Mt Taranaki in the distance

The footsteps we followed went up to a nearby saddle, from where one could get to the crater lake. We had to leave those footsteps to get to the summit. The terrain got even steeper and we had to front point the last bit. We chose to get out the rope. I went up first with Lisa’s tools and she followed with my basic ice axe. After one pitch we reached a ridge, from here it was only a few metres to the summit. Those metres were really windy! Some lasst footsteps and we were on the highest point of the North Island! Unfortunately we couldn’t see further than to the crater lake. We hoped to see Mt Ngauruhoe and Tongariro but we couldn’t…

We were at the top, but how do we get down again? We wanted to follow the other ridge to get to the saddle, where the other footsteps went up. That was definitely no option as there were some vertical drops. So we had to take the same way down. Instead of climbing down we wanted to try something new. A snow bollard. We digged a snow bollard and around that we put the rope. We backed up the snow bollard with a classic T anchor. As Lisa rappelled down, and nothing moved even after a bounce test. I built back the T anchor and rappelled down as well. 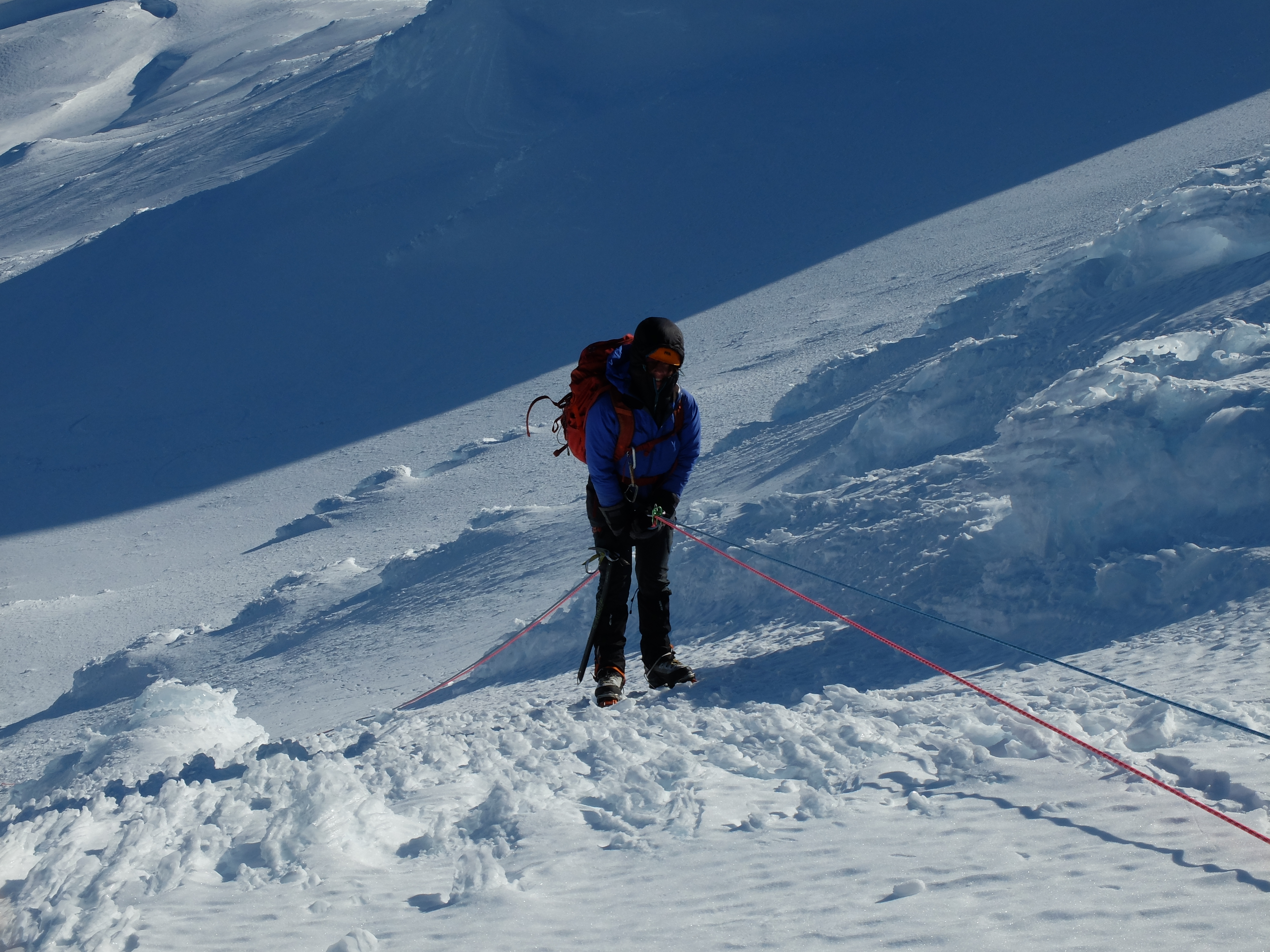 Rappelling down 50m in snow felt like 10m on rock. A second later I was 50m below the windy ridge. From here we went back to the skifield, which was already closed. A few people went up the saddle and skied down from there to have a last long run. As the sun went down, we had amazing views to Mt Taranaki. We have to climb that one aswell.

Wow, thank you for the report and photos! I’ve been to the Dome and the Crater Lake but never attempted the peaks. I happy to see that heavy bag of climbing gear has proved useful 🙂

Hey there! Nice to see you around here. We are one year abroad in New Zealand and would like to share stories and adventures of our outdoor experiences on this website.