The day started so good. We slept in and at least my night was even better than last night. Slept in – woke up. Just as easy as this. We planned to hitchhike to the trail today but we got somewhere else.

Back to the morning ?. We wrote some postcards and had a look at Kevin’s birds in the backyard. He recommend us to do it. There were some really cute ones which had a massive body compared to their size of the wings. We headed to the I-site where they have computers on which we searched for some jobs we could do after the trail. We translated and updated our CVs and applied for one job. I was able to get the widget working on the current location page and did some minor improvements you might have seen. Time went fast. We got out of the I-site at about 4pm and we tried to hitchhike out of Methven to get to the trail or maybe just to stay at a campground near Lake Coleridge.

A nice lady stopped and she took us to the main road in the right direction (SH 72). We were standing at the roadside quite a while. We looked at the map for the next campground at the Rakaia Gorge. It was only 4km away. Google Maps said 51 minutes to walk or 3 minutes with the car. We were asking ourselves: is it worth going there by foot? This is only the case when no car will stop for us in the next 48 minutes which seemed quite unlikely. So we decided to stay. It was getting colder but the down jackets were buried in the backpacks under all this food we brought.

Another car is driving in the right direction. We both thought it won’t stop because it was going so fast but then suddenly it slowed down. It was an electrician from Christchurch heading back. He asked us where we want to go. We said “Lake Coleridge”.

We were prepared that he will say that he is not going there but he can give us a ride to another intersection. And this is what he mainly said. We put our bags in the back of the truck and got in the car. He said that he’ll drive a little bit further to a better road where there’ll be more traffic. I was looking at the map and at that point it looked alright for me but it wasn’t alright after all. After some minutes I was looking at the map again and realized that we were going to the opposite direction from where we actually wanted to go. At that point it was more or less to late. So we decided to get out at the next settlement. He dropped us off at Hororata.

He still believed to drop us at the right place but he couldn’t change it so we just left him in this believe.

We both we’re quite hungry and there was a Cafe called “The Butcher’s Pie” just around the corner offering special pizzas for friday night ?.

We went there with our big packs and ate pizza. It was really filling! We nearly hurried to eat because we still needed to find a place for the night. 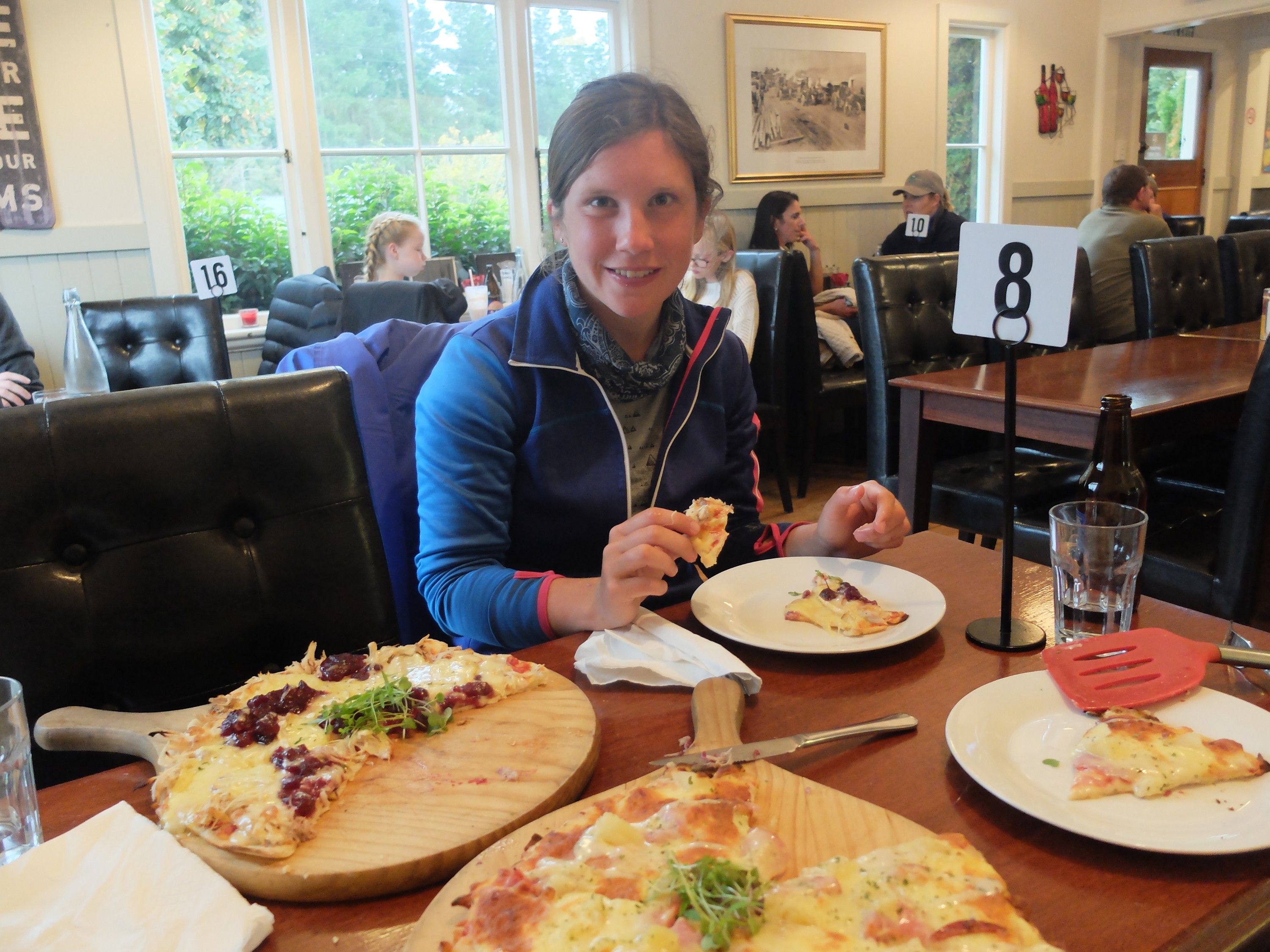 When the waitress caught that we don’t have a bed for the night yet she was concerned about us. She started to ask people that were around at the cafe if they have a free bed for us. A couple sitting at a table next to us offered us to stay with them the night.

Jay and Sian are both from the UK and are working here for already 3 years. They got here to NZ like us but never left again. We had some nice talks and left to their house.

We are lucky bastards. It was nearly dark and there was no campground nor an accommodation around but it turned out to be good day in the end!

Hey there! Nice to see you around here. We are one year abroad in New Zealand and would like to share stories and adventures of our outdoor experiences on this website.